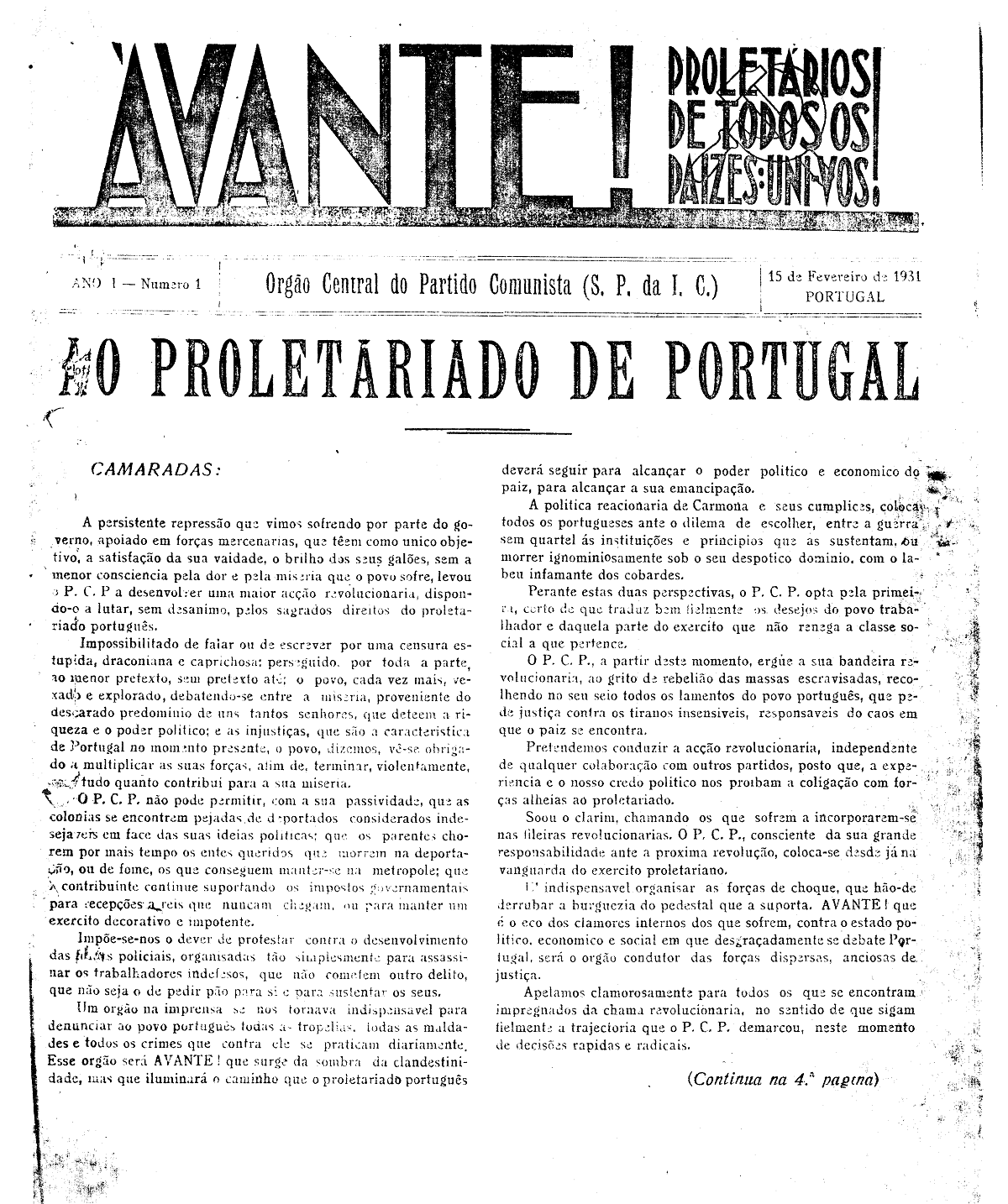 #Inthisday 15 of February, in the year 1931, the first issue of the newspaper “Avante!”, The central organ of the Portuguese Communist Party, was published. In its first editorial, was addressed the “proletariat of Portugal”. It will be, even in a global context, a unique case of a clandestine newspaper published interruptedly for such a long period.

In the midst of the Military Dictatorship, with the PCP struggling with various difficulties, the “Avante!” began its publication, after the party had already published other newspapers such as “O Proletário” or “O Comunista”.

It is following the arrival in Bento Gonçalves’ leadership in 1929 and the transformations that have started since then that the PCP restructures and launches itself in the publication of “Avante!”.

Printed in clandestine printers and distributed by militants in the most adverse conditions, the publication of the newspaper will not be regular and was interrupted for two years, after the repressive waves reached several leaders and the printers of the newspaper. In this first phase, print runs reached 10,000 copies, particularly during the years of the Spanish civil war.

The clandestine printers, installed in clandestine houses, were essential for the activity of the PCP and, inevitably, one of the main targets of the regime. José Dias Coelho, José Moreira, of whom we spoke here recently, Catarina Machado Rafael and Joaquim Rafael, Úrsula and José Pulquério were among the essentials that stood out in this absolutely critical work for the life of the Party that was the clandestine press and the publication of “Avante” ! ”.

In 1965, in the report presented on the 6th Congress of the PCP, Joaquim Gomes asked: «Who can imagine how many difficulties it is necessary to overcome in order to assemble, feed and maintain a printing press in the conditions of clandestinely to which we are forced? Who can imagine how many eyes and nerves have been spent, in days and nights in a row, putting together letters that the school has not always taught to know? Who can imagine that, next to the “type” boxes, children and young people have grown up who almost never played with other children and young people, who know little about life more than putting together letters and taking the “Avante!” or “O Militante”? And all of this is not on the pages of “Avante!” or on the printed lines, but on the lines that are not read and can hardly be imagined. »