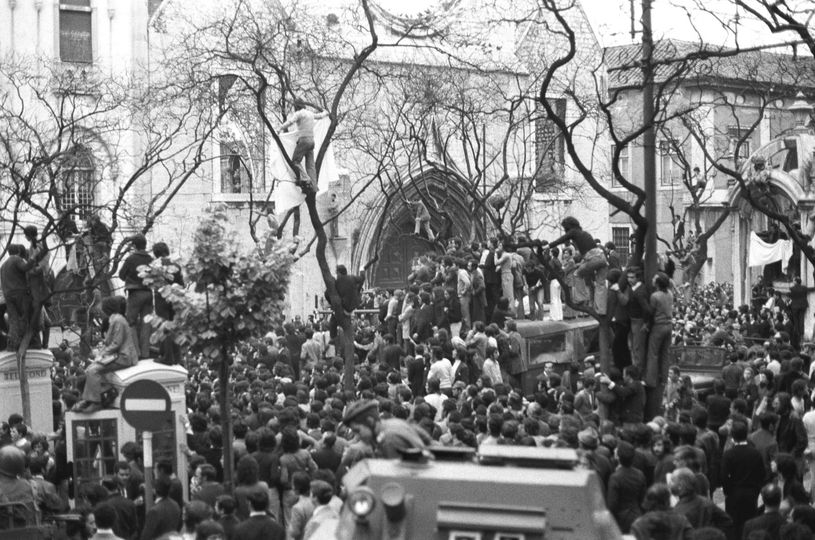 22:55 : 📻 The associated radio stations broadcast Paulo de Carvalho’s song “E Depois do Adeus”, the password for the departure of the troops.

00:20 : 📻 By Radio Renaissance was transmitted José Afonso song, “Grândola, Vila Morena”, was the password that indicated that military operations were taking place as planned.

04:20 : 🎙 Through the microphones of Radio Clube Portuguese (RCP), the first statement of the Movement was read.

11:00 : Salgueiro Maia started the march to the Carmo Barracks, being victorious by the population who, disobeying the recommendations of the MFA to stay at home, went out on the street in support of the revolting military.

Late morning : People surrounded the PIDE/DGS headquartes, from which shots were fired that left four dead and several dozen injured. A unit of Marines who had moved there, meanwhile, had returned to barracks after talks with Commander Alpoim Calvão, who was at the premises of the political police.

15:00 : 📢 Before the impasse experienced in Largo do Carmo, where the forces loyal to the regime showed no signs of surrender, Salgueiro Maia ordered his capitulation in fifteen minutes.

18:00 : Spínola entered the Carmo Barracks, to the applause of the popular who filled the square. Marcelo Caetano transmitted the power to the General, asking him to prevent him from falling into the street.

18:40 : 🎙 The RTP emission is interrupted, and a statement from the MFA is read.