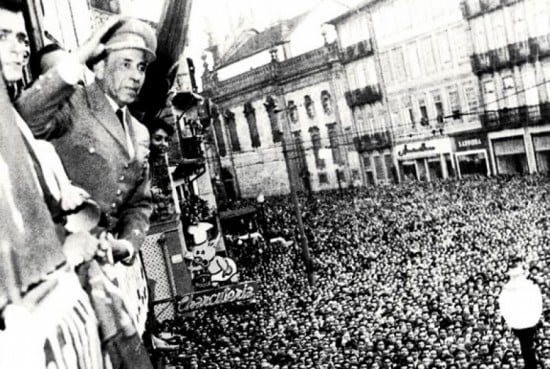 “Obviously, I fire him.”

It was in this way that, on May 10, 1958, Humberto Delgado, candidate of the opposition to the presidential elections, answered the question at the press conference at Café Chave d’Ouro: “Mr. General, if you are elected President of the Republic, what will you do to the Board Chairman?”

On May 14, 1958, the opposition candidate was enthusiastically received in Porto by thousands of people. The publication of photographs of this rally was banned in the newspapers in the following days. There are other demonstrations in the Porto region and there are clashes with the police, namely on the return to Lisbon at the Santa Apolónia station the following day.

Humberto Delgado was born #inthisday May 15, 1906, in Boquilobo, Torres Novas. His candidacy for the Presidency of the Republic, in June 1958, seriously shook the dictatorship, generated a gigantic wave of popular support and united the opposition to the regime, after the withdrawal of Arlindo Vicente, candidate supported by the PCP. The electoral process would translate into the most complete fraud, with intimidation, prohibition of inspection of the electoral act, falsification of results and several arrests of supporters of Humberto Delgado.

In February 1965, he was ambushed and murdered by PIDE, along with his secretary Arajaryr Campos, near Badajoz.

This year, we celebrate the 115 years of his birth.