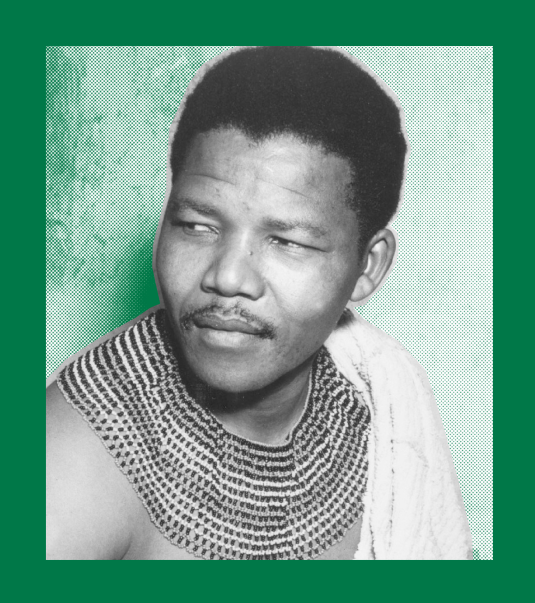 Nelson Mandela was born on July 18, 1918, in Mvezo, South Africa. A law graduate, he became involved early on in protests against the lack of racial democracy. Upon moving to Johannesburg, he continued to encounter a regime of terror imposed on the black majority. He joined the African National Congress in 1942 and in 1944, together with Walter Sisulo and Oliver Tambo, founded the “Youth League of the African National Congress (ANC),” which became the main instrument of political representation for blacks. After 1948, it became more active in the CNA. Committed initially to nonviolent acts, they began to resort to the use of weapons after the Sharpeville massacre in March 1960, when South African police shot black protesters, killing 69 people and wounding 180.
In March 1962 , he meets in Rabbat (Morocco) with members of liberation movements against Portuguese colonialism and #inthisday August 5 of that year, he is arrested. In 1964 he is sentenced to life imprisonment, in Cape Town, in Robben Island prison and later in Pollsmoor and Victor Verster prisons. “I have fought against white domination and I have fought against black domination. I have cherished the ideal of a democratic and free society in which all people can live together in harmony and with equal opportunities. It is an ideal that I hope to live for (…). But should it be necessary, it is an ideal for which I am ready to die. Nelson Mandela, 1990
After 27 years of imprisonment and a great deal of international pressure, on February 11, 1990, Mandela goes free.
In December 1993, he received the “Nobel Peace Prize” and in May 1994 he became the first black president of South Africa. Today, he is one of the symbols of human rights, a man who has always fought and resisted for the freedoms of his people.