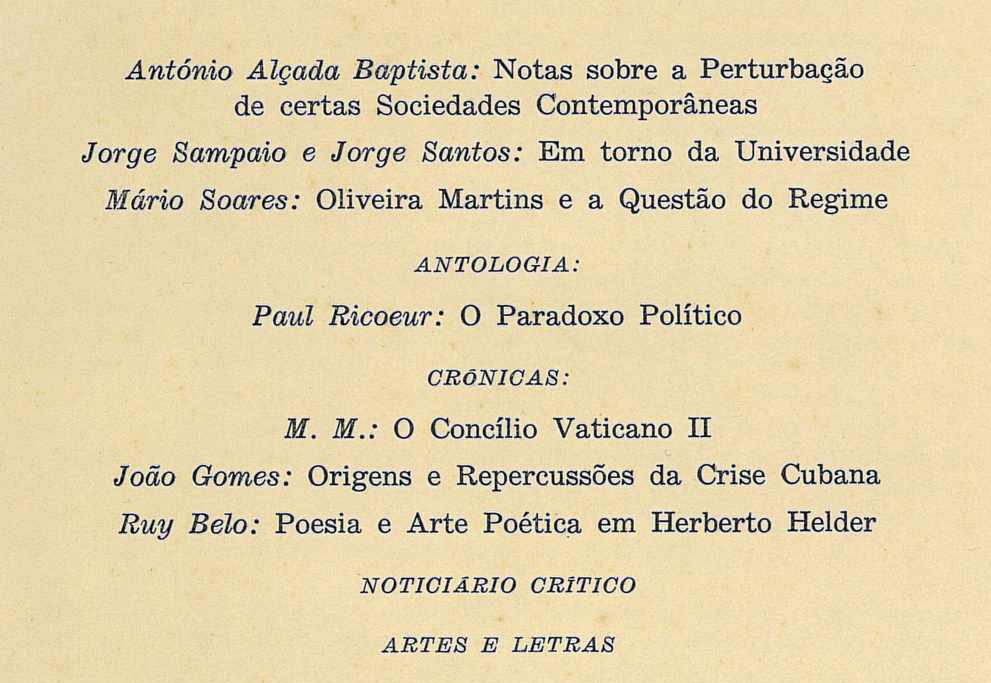 In January 1963, “Time and Mode. Magazine of Thought and Action”, one of the most important publications of the second half of the 20th century in Portugal and a space for debate, intervention, opposition to the dictatorship and autonomy of the Portuguese Communist Party. In its genesis are the so-called progressive Catholics critical of Salazarism, linked to the doctrine of the Second Vatican Council, where António Alçada Baptista, its first director, João Bénard da Costa, Pedro Tamen, Alberto Vaz da Silva, Nuno Bragança and Mário Murteira, pontificated, lay socialists, such as Mário Soares or Salgado Zenha, and a generation from the student struggles of 1962 such as Jorge Sampaio, Medeiros Ferreira or Manuel de Lucena.

Never shying away from controversies, “Time and Mode” reunited some of the main figures of the Portuguese intellectuals of their time, representing various currents of thought of opposition to the Estado Novo, not always in agreement with each other. Throughout the 1960s, the magazine opened up to other political sensitivities, was influenced by the winds of the French May 1968 and, between 1967 and 1969, took a left turn. “Time and Mode” will go through various adversities, namely financial difficulties, and, mirroring what was also a changing time and world, with the dawn of the 70’s, it will move away from its initial matrix. After the clash between opposing currents and the removal of Bénard da Costa, “Time and Mode” would take a Maoist line, approaching the meantime created the politic party MRPP.