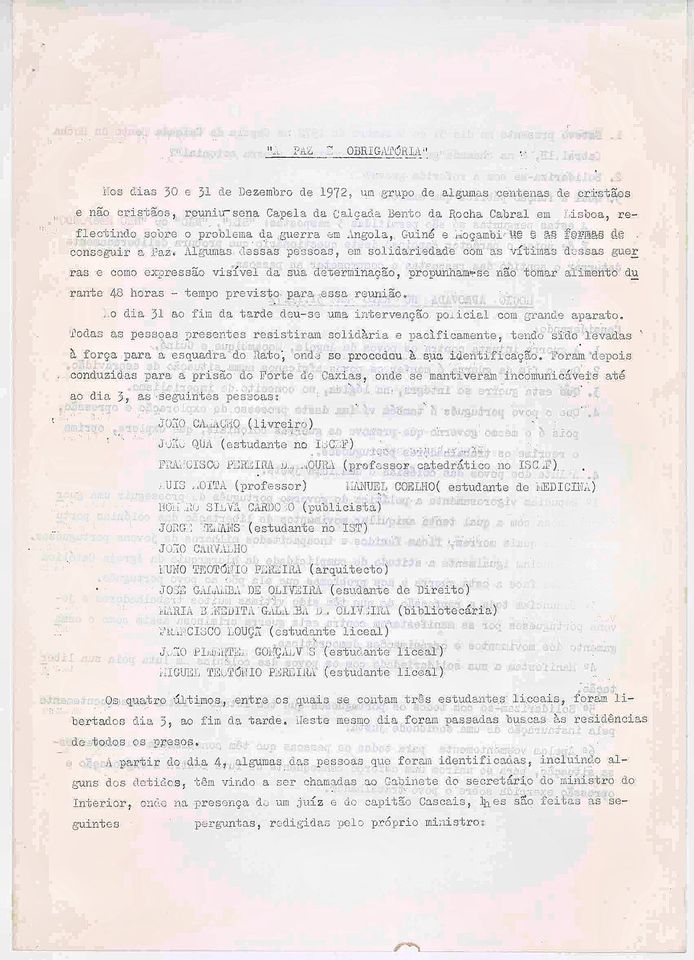 #Inthisday December 30, 1972, a group of Christians, to which non-Christians would join, organized a 48-hour vigil in the “Capela do Rato” in Lisbon. The protest began after the afternoon Mass, reading a document of intent, which included a hunger strike. The idea was to reflect on the situation of the colonial war and discuss ways to achieve peace. Outside, not only in Lisbon, petardos spread pamphlets appealing to solidarity with the hunger strikers.

The next day, the message is again transmitted at the door of several Churches, while inside, in the Chapel, a motion was passed repudiating the government’s policy of “pursuing a criminal war with which it tries to annihilate movements to liberate the colonies” and denouncing the “complicity of the hierarchy of the Catholic Church in the face of this war”. At the end of the day, the vigil would be interrupted by police forces. The participants were taken by the authorities for identification, and some were taken to Caxias, where they remained incommunicado. Civil servants present at the vigil would be the subject of dismissal proceedings.

The communiqué released on January 7, 1973, containthe motion approved in the “Capela do Rato”, as well as some extracts from another communication distributed to the population on December 31, 1972.

The repercussions of the vigil of the “Capela do Rato” led the President of the Council to intervene in public, reacting in a speech on radio and television. The matter would also reach the National Assembly, which discussed it over several sessions.