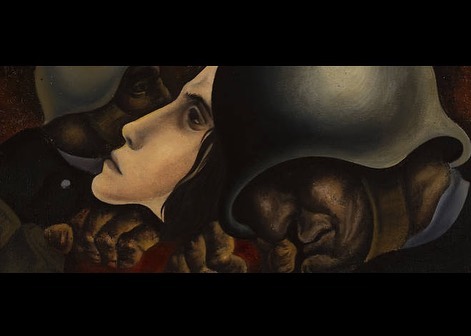 Júlio Pomar was born in Lisbon, #inthisday January 10, 1926, and would become one of the greatest Portuguese painters and a multifaceted artist who advanced in painting, drawing, sculpture, ceramics, engraving, assemblage, set design, tapestry, illustration and even literature and poetry.

He attended the António Arroio School and the Schools of Fine Arts of Lisbon and Porto which he abandoned after a disciplinary suspension for involvement in student struggles.

In 1946 he started a large mural at cineteatro Batalha in Porto that will be destroyed by government decision, apparently in retaliation for Júlio Pomar’s support for Norton de Matos’ candidacy. For being part of the Central Commission of the Movement for Democratic Youth Unity (MUD) and signing a manifesto on the arrests, he was arrested in April 1947 and sent to Caxias prison, being returned to freedom in August. During the incarceration in Caxias, where he meets Mário Soares who will draw then and later, he made a series of drawings about prison daily life. Tried in plenary court in 1949 he was sentenced to 30 days of correctional prison and loss of political rights.

The painting “Resistência” is seized at the General Exhibition of Fine Arts in 1947, when he exhibits individually for the first time in Porto. In 1949 he was removed from the position of drawing teacher in technical education due to his participation in the presidential candidacy of Norton de Matos and for having drawn the portrait of the candidate, widely publicized during the campaign.

“The March”, “Resistance” or the “Lunch of the Trolha” are some of his most markedly political works. A man of causes, a citizen and a resistant citizen, civic and political commitment has not only been his work, but also his life.

In 2004 the Júlio Pomar Foundation was created and today in Lisbon, on Rua do Vale, we can visit the Atelier-Museum Júlio Pomar, integrated in EGEAC Cultura in Lisbon.