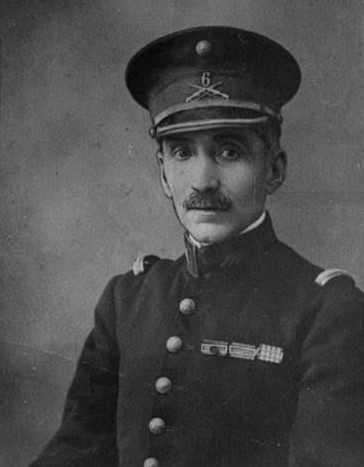 Adalberto Gastão de Sousa Dias was born into a family of military men and republican traditions. A member of the Republican Party since 1910, he participated in the fight against the monarchist incursion, as a major, in 1912. He returned to the defence of the Republic in the fight against the conservative bloc of Sidónio Pais in 1917, eventually being arrested and placed in the 18th Reserve Infantry Regiment, in Porto. It was in this regiment, already as a colonel, that he opposed the proclamation of the “Monarchy of the North”, in January 1919. In 1921 and 1923, he was a member of parliament for the constituency of Porto and was appointed Minister of War several times.

At the time of the military coup of 28 May 1926, Sousa Dias was Commander of the 3rd Army Division, in Porto. He led the resistance against the rebel forces and initially refused any cooperation. However, in the face of widespread adherence to the revolt by several units under his command, Adalberto de Sousa Dias eventually joined the military movement, on behalf of the Division he commanded, and immediately asked for his resignation. He was a declared enemy of the newly installed military dictatorship from its very beginning, and actively participated in various actions aimed at its overthrow.

He took charge of the uprising of 3 February 1927, in Porto, whose defeat led to his arrest and deportation to São Tomé, in March. In December 1927, he was transferred to Faial, in the Azores, and in 1929, he was tried in Special Court, in the Fort of Graça in Elvas, and sentenced to two years in prison. His residence was fixed, once again, in Faial, in 1930 and, later on, he was deported to Funchal, on the Madeira Island. On this island, he was contacted to lead a new revolutionary movement in April 1931 and appointed military governor of Madeira by the Revolutionary Junta. When the insurrection was defeated, Sousa Dias was dismissed without any pension, rights or honours, arrested again, and deported to Cape Verde, where he was interned in the Concentration Camp for Political Prisoners of São Nicolau, being then transferred to the island of Santo Antão and, finally, to the island of São Vincente.

It was in Cape Verde that he spent the last years of his life, without ever failing to conspire and establish relations with the opposition in Portugal and the exile, in order to overthrow the military dictatorship and, then, the Estado Novo. After seeing his name excluded from the amnesty of 1932 and the Decree No. 21 943 of December of that year and following the hardships he suffered during his successive arrests and deportations, general Sousa Dias died in 1934, in Mindelo, where his residence was fixed.