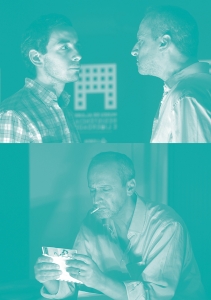 Auditorium of the Museum of Aljube

Theatrical version of Text and Staging by CASTRO GUEDES
Based on the novella E SE FOR RAPARIGA CHAMA-SE CUSTÓDIA (If it’s a Girl We’ll Call Her Custódia) by LUÍS DE STTAU MONTEIRO
Interpretation by FÁBIO VAZ and PAULO LAGES.

“What’s most surprising about this text is the sweet side that breaks and overflows the bars of a prison, even when they suffocate the senses and the heart. The idea of turning this dialogue (in novella form) provided by the sarcastic Sttau Monteiro, from this little literary jewel of tenderness, into a brief theatrical moment was very old. I was fortunate enough to be enthusiastically welcomed by a museum that is more than symbolic for this, and by a dynamic, cultured and cooperative director who, without me knowing, already had the idea of honouring Sttau Monteiro. The rest was relatively easy: I just turned thoughts into speech and crossed different moments, daring to make one or two small cuts (literature, is one thing, theatrical dialogue is another), and introduced explicit location of times and spaces: a political prison during the dictatorship, a more rural world and another more cosmopolitan, two generations and the resilience that was composed, in part, by the Resistance itself.
And if it is a struggle it is in the custody of Love…”
Castro Guedes, Theatrical Version of the text and staging. July 2017

In the Custody of Love