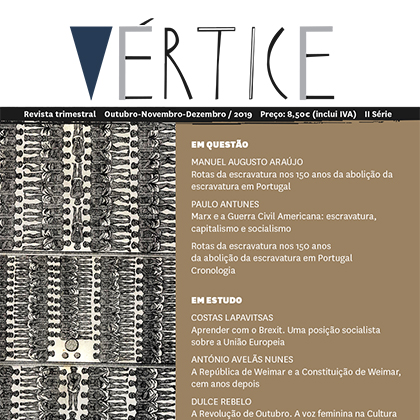 This month the launch of VÉRTICE, out./nov./dez. 2019, Nº 193, II Série, is in charge of the Architect Manuel Augusto Araújo and Professor António Avelãs Nunes and the presence of the publisher (Página a Página).

Highlight for a dossier on the 150 years of slavery abolition throughout the Portuguese Empire, for a study by António Avelãs Nunes on the historical reading of the Weimar Republic, a hundred years later, and for an unpublished article by Hélia Correia on Gaibéus, originally written when the 40th anniversary of the 1st edition of this pioneering work by Alves Redol was celebrated.