«Coragem Hoje, Abraços Amanhã» [Courage today, hugs tomorrow] is a message of support shared by the women detained by PIDE during the dictatorship. In the northern stronghold of Caxias prison, they communicated through sounds on the wall and whispered words of support and courage.

In the year in which 47 years of the April Revolution are celebrated, EGEAC, Abril in Lisbon and the Aljube Museum Resistance and Freedom pay homage to the memory of the resistant anti-fascists and to the struggle for freedom.

At a time when the pandemic limits contacts, let the inspiration on the resistance the resilience necessary for better days.

We also launched a collective challenge: glue the poster “Courage, today hugs tomorrow” to the window, thus transforming this phrase into a global message of hope for a better future. 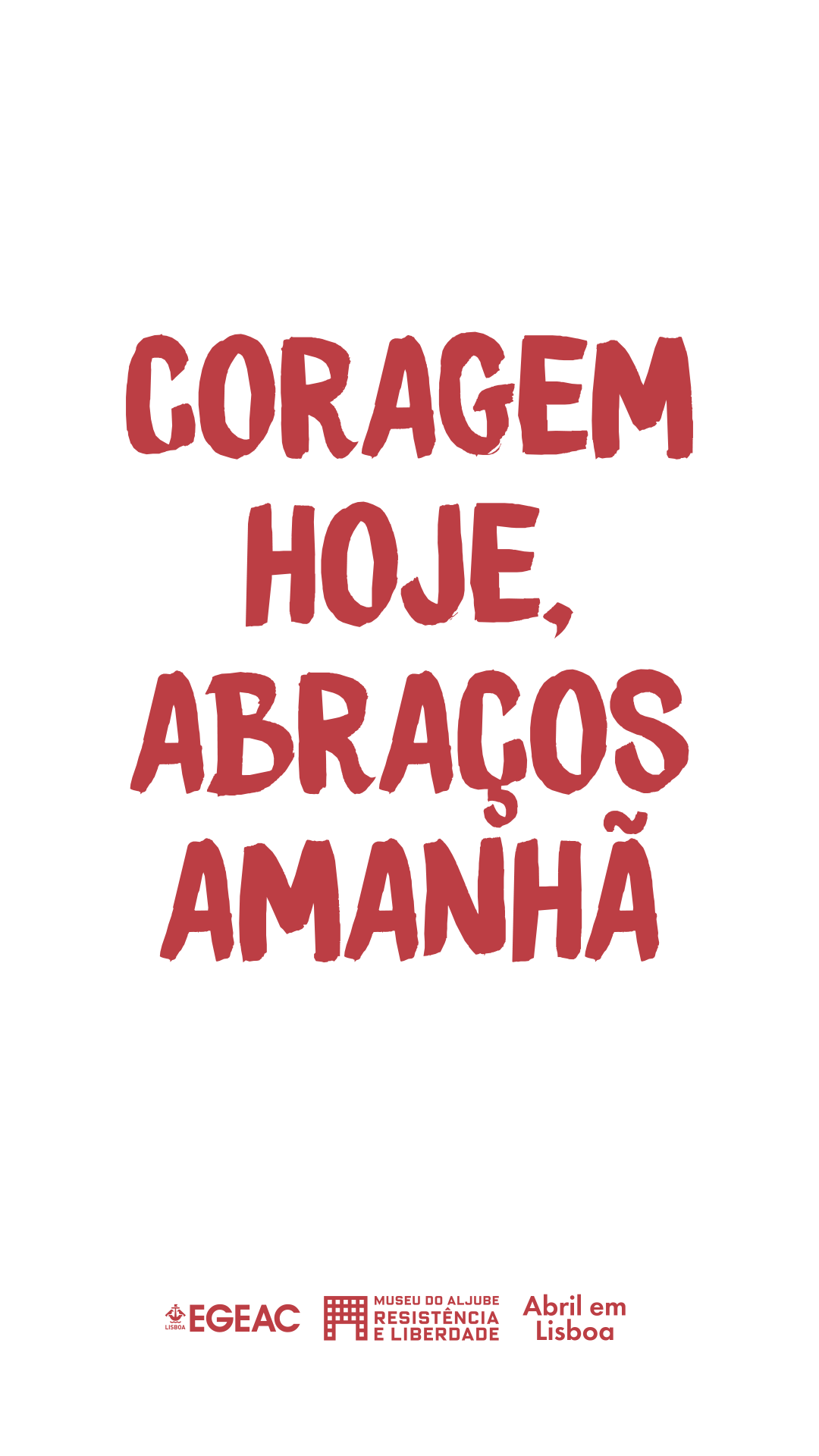 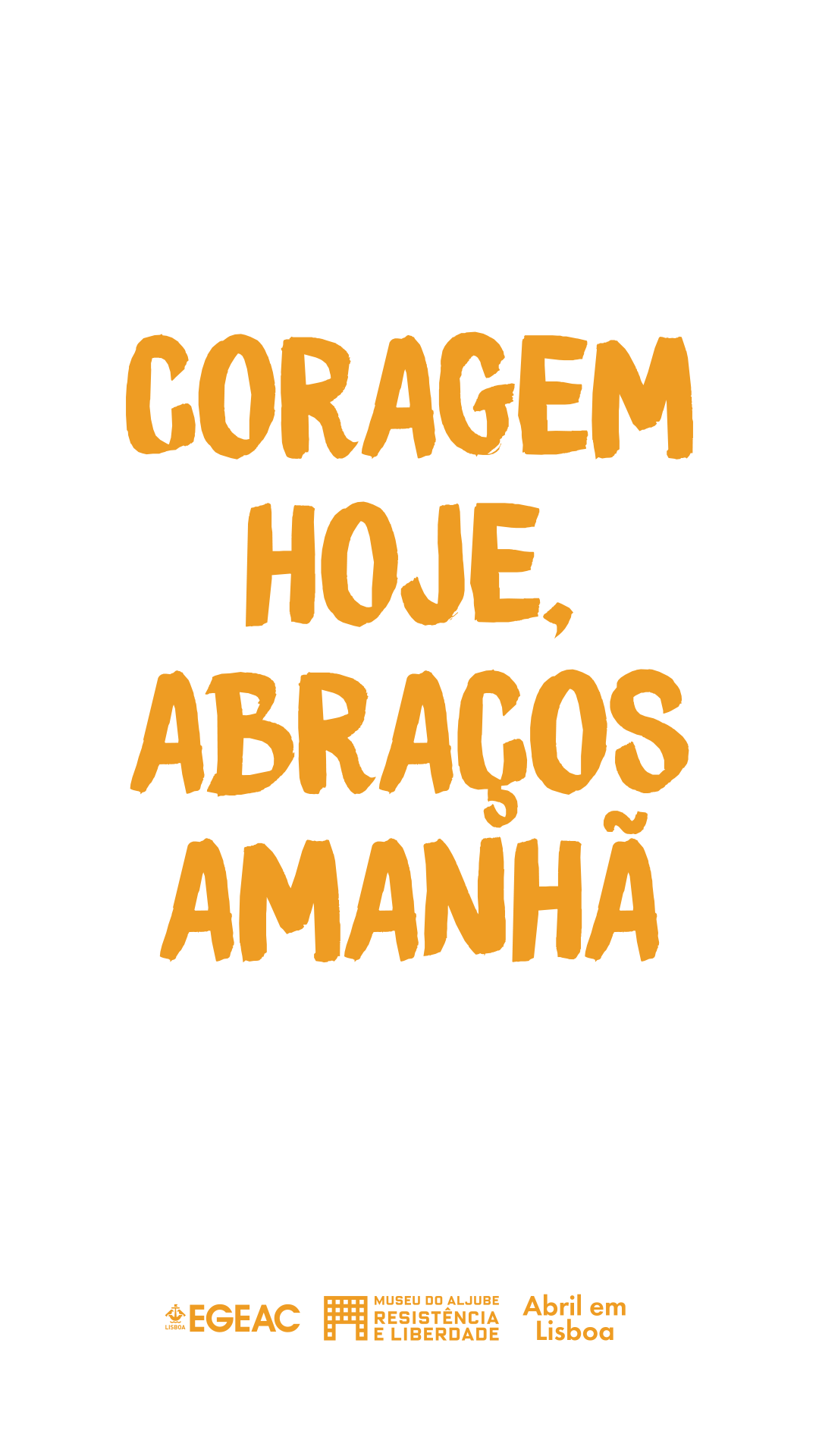 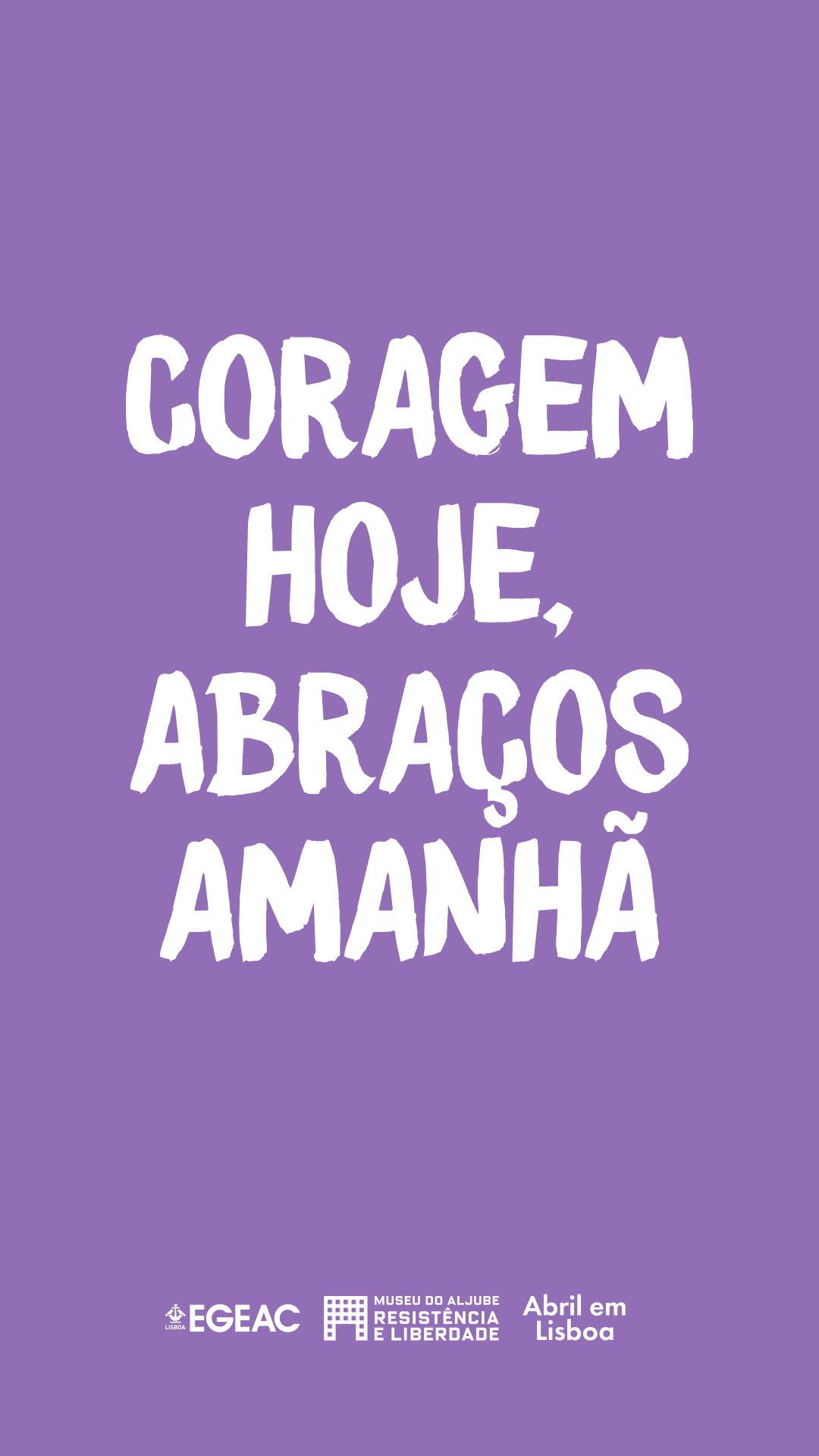 In addition to the play “Amores na Clandestinidade” [Lovers in Clandestinity], the Aljube Museum Resistance and Freedom also evokes the 25th of April with the exhibition “8998, Pomar” which shows us a selection of drawings, prints and paintings by the painter Júlio Pomar, in a happy meeting with the Museum-Atelier Júlio Pomar; a conversation with Margarida Tengarrinha around her book “Memórias de uma Falsificadora” [Memories of a Forger] and a play based on the same work; a peddy paper “Pelos Caminhos da Liberdade” [Throught the Paths of Freedom]; a guided tour to the museum’s long-term exhibition and an intimate concert with musician Rogério Charraz and composer João Monge from Zeca Afonso’s album “Cantigas do Maio”.

A happy meeting between the Atelier-Museum Júlio Pomar and the Aljube Museum Resistance and Freedom gave rise to this exhibition where a selection of different nuclei of drawing, engraving and painting is presented, but also documents alrelated to works and episodes of censorship that refer to the period of closure, and persecution by PIDE to the painter Júlio Pomar. Few still know, or rather less than would be necessary, that the painter was the prisoner nº. 8998 of the General Register of Prisoners of PIDE, and that he was imprisoned in Caxias, between March and August 1947, due to his participation in actions of resistance to the regime.

From her book we talked to Margarida Tengarrinha about her memories of underground and resistance to fascism.

Walk the paths of those who opened the doors of Abril – from Terreiro do Paço to Largo do Carmo, from Misericórdia to the former PIDE headquarters, on Rua António Maria Cardoso. We set out to discover some of the places and decisive moments of April 25th, 1974, addressing the theme of resistance to dictatorship, the route and history of the conquest of freedom.

Suitable for over 10 years;
Duration: 90 minutes;
Meeting point: entrance of the Aljube Museum;
Hiking shoes are recommended;
Mandatory use of mask.
Mandatory registration and subject to the maximum limit of participants per group: inscricoes@museudoaljube.pt

Visitors begin the museum tour at the memorial in honor of the political prisoners and on the panel on the history of the building; on floor 1, the characterization of the dictatorial portuguese regime (1926-1974), its means of repression and oppression (censorship, the police and political courts). On level 2, the resistance of the oppositions (semi-legal and clandestine), the arrest, the torture, the “curros” of isolation. On level 3, the anticolonial struggle and the independence liberation movements, the overthrow of the dictatorship and the 25 april 1974.

Mandatory registration and subject to the maximum limit of participants per group: inscricoes@museudoaljube.pt

Intimate concert with the musician Rogério Charraz and the composer João Monge about the album “Cantigas do Maio” by Zeca Afonso.

Joaquim Horta adapts to the theater the book by Margarida Tengarrinha “Memórias de Uma Falsificadora – A Luta na Clandestinidade pela Liberdade em Portugal”, which tells how the author used her ability as a visual artist and fine arts student to serve the falsification of documents, ensuring the work of those resistant to Salazar’s dictatorship.
The willingness to adapt Memoirs of a Forger is part of a sentence written by Margarida Tengarrinha in her book: “When I read stories of several comrades, which have already been published, I find that they speak about important political facts, high and heroic moments of the struggle, but never address these everyday issues that we women lived patiently. Was it less heroic that our exhausting and dark day-to-day life?”
It is thinking about a picture of everyday life in the period between 1948 and 1974 that the actor and director leaves for this new paly, using the words and ideas of Margarida Tengarrinha.

All activities are in portuguese.